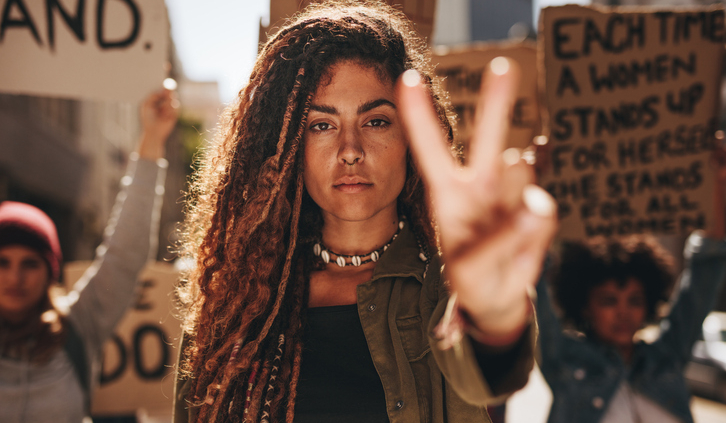 We love to support people who are making it their mission to make the world a better place. This week we want to introduce you to nine amazing social activists who want to change the world.

Sonita made her voice heard with the release of her rap video Brides For Sale in protest of forced marriages in her home country, Afghanistan. She was almost married twice, once at 10 years old and again at 16 years old before she rebelled by releasing her song on Youtube. At the time she was living in Iran and risked imprisonment as it was illegal for women to sing in public. However, her song went viral and she won a scholarship to study in the USA. She uses her experience to continue to rap and inspire women to rebel against the cruel traditions of child brides. Her website Sonita aims to amplify the issue of child marriage and aims to educate women internationally.

“WE CAN’T CHANGE ANYTHING, IF WE DO NOT UNDERSTAND IT.”

Emma González is a survivor and activist. She was a high school senior at Stoneman Douglas High School, Parkland when a gunman opened fire killing 17 people. In response, she became a powerful voice for gun control and helped found March For Our Lives. Her speech at the March For Our Lives event stilled the world for the six minutes and 20 seconds that she stood in silence before explaining that was the amount of time it took a shooter to kill 17 people at her school. Emma uses her platforms to take a stand against violence and encourages others to do the same.

“Change ? in my country ? it’s more likely than you think.”

At the ages of 10 and 12, Melati and Isabel started their own movement,Bye Bye Plastic Bags. As two teenagers living in Bali, they were inspired by Rwanda, Africa banning plastic bags entirely. What started as a basic mission to get the people of Bali to start saying no to plastic bags, quickly became a bigger movement. They started beach cleanups, petitioned their government and their movement grew into an organisation with 25 staff and teams in fifteen different countries all working to reduce plastic bag use. Recently, the entire island of Bali was declared plastic bag free and Indonesia and has now committed to banning plastic bags completely by 2021.

‘What can we do as children living in Bali, NOW, to make a difference?’

Malala Yousafzai is the youngest Nobel Prize laureate in history. While living in Pakistan under the Taliban rule she wrote a blog about life under the Taliban for the BBC. She was outspoken about the change she wanted to see and how she hoped to start a political party of her own to promote education and to create the Malala Education Foundation to help poor girls go to school. But, her activism and outspoken opinions about female education went against the Taliban rules, and in October 2012, Malala was shot by a Taliban gunman on a school bus.

The murder attempt galvanised international support for her and her family who were able to move to the U.K. Malala has not stopped speaking out about the importance of education for every child. She has founded the Malala Fund and published her first book, I Am Malala. In 2014 she won the Nobel Peace Prize for her “struggle against the suppression of children and young people and for the right of all children to education”.

We realise the importance of our voices only when we are silenced.

Although Emma Watson is already a celebrity, she is also a co-founder of the Hollywood Time’s Up movement, a UN ambassador and a constant champion of women’s rights. She is outspoken about the need for all women to have safe, fair and dignified work. Her work with the Time’s Up movement focused on exposing inequality and injustice for women in the workplace. She is determined to ensure the end of discrimination, harassment or abuse of women in the workplace. Her #HeforShe campaign asked men to step up and support equality for women too.

No list of social activists would be complete without Greta Thunberg. At 16, this incredible and passionate environmental activist is setting out the change the world. Greta drew the attention of the world by turning up outside the Swedish Parliament for 3 weeks to urge her government to act on the climate crisis. Despite being too young to vote, she has sparked an international youth movement – Fridays for Future. Her passion has inspired millions to take notice of the climate crisis. In a speech to the 2018 COP24 in front of world leaders, she cemented her status as a bold and fearless force for change, “I’ve learned you are never too small to make a difference. And, if a few children can get headlines all over the world just by not going to school, then imagine what we could all do together if we really wanted to.”

“Yes, we are failing, but there is still time to turn everything around — we can still fix this. I want you to act as if the house was on fire. Because it is.”

Melanie Joy, PhD, is an award-winning author of Why We Love Dogs, Eat Pigs, and Wear Cows: An Introduction to Carnism. Her TED talk Toward Rational, Authentic Food Choices outlines the irrational choice of eating meat. She aims to empower concerned citizens and vegan advocates and to help create a more compassionate and just world for all beings, human and nonhuman alike. Her movement Beyond Carnism is dedicated to exposing and transforming carnism, the invisible belief system that conditions people to eat certain animals.

“Educating yourself does not mean that you were stupid in the first place; it means that you are intelligent enough to know that there is plenty left to learn.”

Lauren Ornelas is an animal rights advocate and the founder and executive director of the Food Empowerment Project This vegan food justice project raises awareness about the power of food choices. It also educates on the interconnected problems of animal abuse, environmental depletion, unfair conditions for agricultural workers, and lack of healthy foods in low-income areas. She is quite a persuasive advocate and is reportedly responsible for turning Whole Foods CEO John Mackey vegan.

“When people not only use their individual food choices but also use their collective voices to change policy or corporations, that is power”

The Fine Art of Shopping with Intent
Scroll to top
We use cookies on our website to give you the most relevant experience by remembering your preferences and repeat visits. By clicking “Accept”, you consent to the use of ALL the cookies.
Cookie settingsACCEPT
Manage consent