We are due to meet Massimo at Luciano’s studio at 9 am and by chance, we meet him in the parking place just a few minutes before nine. He had arrived on his motorbike, as he exclaimed, “It’s such great weather for a motor ride” to explain his different choice of transportation today.

After a quick update, we proceeded to the studio and rang the doorbell. Luciano who had opened the gate from inside his atelier greeted the three of us at the door, surrounded by his barking dogs.

Behind one of the desks in the studio was again Fabio. Silently working on an assignment for one of Italy’s famous fashion brands. I have to admit we experienced some difficulties keeping our eyes averted from the fabrics and prints of the brand that he was working with. But, onto more important tasks, our bags!

First, we addressed the Augustina-bag. We were not happy with the thickness of the bag or with the top. In order for Luciano to see what we wanted for our bags, we had brought some images with us showing examples of the desired thickness, the lines / straight lines and the seams. He then showed us some different solutions with the new materials we had sent, fillings etc., to choose from. After a long discussion of what we would encounter when using these different sorts of materials, we agreed on one sort of thickness and finish. Luciano then walked to the back of the atelier while we continued discussing the bag among ourselves. 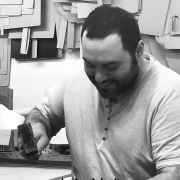 After a short while, he returned with a rough sample. This sample ignited a volley of comments and arguments back and forth between Massimo and Luciano. This continued until just before 1 pm when we decided it was time to take a break for Pranzo (lunch).

With a couple of hours allocated for an Italian lunch, we had time to return to the hotel for a quick lunch and to grab our sweaters as the temperature had dropped a lot. Massimo took the time to return to his office, promising to meet us a little later.

After lunch, we returned to the studio to find Luciano with a sample of the Augustina-bag ready, which finally met all our expectations. It was sample number three… we think.

We then took on the Betty-Joan bag, which, according to Luciano would be quite a challenge for him to assemble. “But!” he exclaimed, while he made a turn and disappeared somewhere at the other end of the atelier, “there might be a solution!”

Upon his return, he held in his hands two different versions of the side of the Betty Joan -bag. Apparently, Luciano had already made two samples with side fillings a few days before our visit, in order to show us the outcome. He added that he wasn’t fully happy with the results but, he had picked up some new ideas from our morning meeting on the Augustina-bag, which he thought he could incorporate. He promised to show us something better the next morning.

So at around 5.30 pm, we concluded the day. As we left, we commented that we were very happy with the exchange of ideas, tips and above all, with the possible solutions presented. We agreed we all would meet again the next morning at 9 am back in the studio.

Alla prossima – Until Next Time