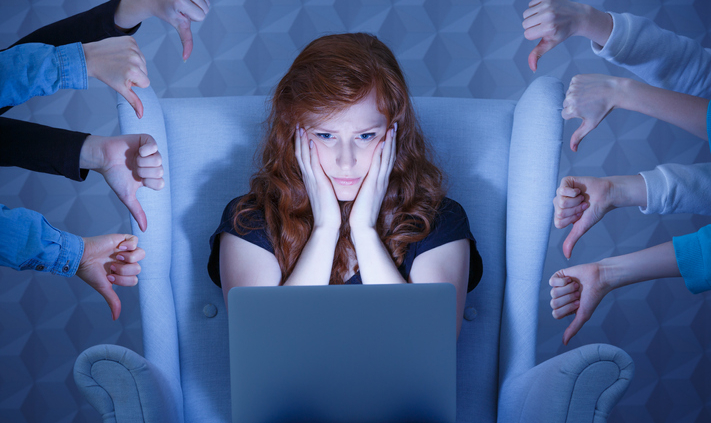 One of the downsides of living in a world that is more connected is that there is little or no buffer of time or space to soften online criticism. We are in the habit of instantly responding to messages, posts or news with the first thought that comes to mind. We feel pressured to react and do not pause for reflection before we write.

As we become more connected, we have become more critical of each other. We give criticism to people we don’t even know, as though it is our right to do so. We do it instantly, without thought, without pause. All this criticism creates massive amounts of data flowing around our online worlds. Worse, it also creates massive amounts of hurt and anxiety among those on the receiving end. One only needs to scroll to the comments on a few news articles or an Instagram post to find examples of unsolicited advice and criticism of the writer.

Unfortunately, criticism is now part of our daily lives, and there is no way to put this genie back in a bottle. While we may not like this, we can learn ways to cope better with it. The stoic premise that we cannot control external events; we can only control ourselves and our responses, is extremely helpful when dealing with criticism. Here are some of the key points we can learn from this approach.

When we are on the receiving end of some sharp criticism, it can help to consider the motives of the person giving it. Don’t immediately jump to the conclusion that they want to hurt you or put you down. Perhaps the person letting you know this concern cares about you and actually wants to help. There can be a hundred positive reasons that someone is sharing criticism of you or your work, so how about keeping in mind the idea that people are innocent until proven guilty, and assume the best, instead of the worst. This way you can respond from thoughtfulness and understanding, which is far more productive than responding from a place of anger and hurt.

Criticism, from anyone, feels like an attack. Remember this when you are tempted to dish out some criticism online. When we receive criticism, our natural response is to get defensive. This natural defense can cause us to respond in ways that we would not normally do. We step into the mode of defending ourselves or our work. Before you respond to criticism, pause and consider all the options. Take time to respond instead of instantly reacting. Reacting relies on reflex, using our fight or flight tendencies. There is no need to react on reflex to an online comment. A slow and mindful reply is the most powerful way to respond. Detach yourself from the reaction, take a deep breath, consider the motive of the critic, and then formulate a response. If you can respond carefully, with kindness and understanding, you may turn a critic into a fan, avoid an argument or save a friendship.

Don’t be influenced by critics. There comes a point when we must learn to stop caring about what others think or say about us. Don’t be distracted by others, especially if the criticism is not sincere or appropriate. Ask yourself if there is any point engaging with someone who is only trying to put you down. Consider the possibility that you are not obliged to respond at all. Many times the best response is none at all. Getting involved in a pointless argument or trying to explain your point is likely to be a big waste of your time. Let it go, move on and focus on the important stuff. As in the famous quote “Be who you are and say what you feel, because those who mind don’t matter, and those who matter don’t mind” (Bernard Baruch).

To Err is Human

Our final suggestion for dealing with criticism is to accept that we are all flawed. None of us are perfect or infallible. Understanding this can help us be more balanced in how we receive criticism. Criticism can often come from a misunderstanding of our message. Instead of seeing the critiquer as in the wrong, understand that perhaps your message is not clear enough and is being misunderstood. Being mindful of the message we are sending, and ensuring it is clear can avoid such misunderstandings.

When we start to deal with criticism in a mindful manner with compassion and kindness, we can do our part to reduce the harm of wild thoughtless criticism that wastes everybody’s time and energy. Let’s instead use our time and energy to focus on creating, learning and building a better world.

As an antidote to battle unkindness we were given kindness

Our Eco-Bucket List For A Greener 2020
Scroll to top
We use cookies on our website to give you the most relevant experience by remembering your preferences and repeat visits. By clicking “Accept”, you consent to the use of ALL the cookies.
Cookie settingsACCEPT
Manage consent